At left is a great photo of the South Side (a.k.a. Southeast Ridge or South Col) route that we’ll be taking up the Khumbu Glacier, the Khumbu Icefall, the Western Cwm, the Lhotse Face to the South Col and on to iconic features like the Balcony, South Summit, Hillary Step, Summit Ridge and the Summit itself (29,035′), some of which are captured in the picture below of the route on the very upper mountain above The Balcony.  You can see a much larger view of each by clicking the pictures.  This is the same route that Sir Edmund Hillary and Tenzing Norgay first ascended in 1953.  This comes from Alan Arnette’s excellent website, which has a ton of great information on it about the route including detailed pictures, etc. and can be found at: 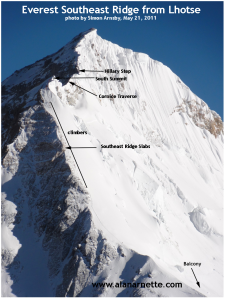 As I complete my preparations for the trip, I updated my LinkedIn profile since I am no longer at IXI/Equifax and stumbled across this interesting fact as I updated my “current job” to reflect my attempt of Mt. Everest and completion of the eight “Seven Summits“:

According to Wikipedia (if you can believe everything you read online): “As of January 2010, approximately 275 climbers climbed all seven of the peaks from either the Bass or the Messner list; about 30% of those have climbed all of the eight peaks required to complete both lists.” So, if successful on this expedition, I would fall into the latter category of ~100 people that have successfully climbed all 8 peaks.  Pretty crazy.  The eight “Seven Summits” include: