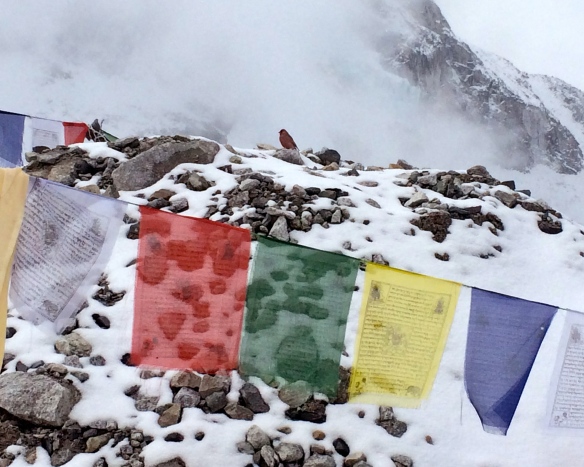 A rosefinch bidding us farewell at Everest base camp

Below, please find a link to a full photo album with captions/commentary throughout that will guide you through our up and down journey to and from Everest base camp this year.

We’re finally settling in after 2 weeks of being home and returning to a somewhat normal schedule.  We are glad to be home, however, our hearts continue to ache for those still digging out and piecing their lives back together in Nepal.  If so inclined, please donate to help all of those in need through this long-term recovery process.  My sincerest thank you to you for doing so and my utmost gratitude to those of you that have already given so generously.

As the suffering in Nepal seems to have no end after today’s 7.3 magnitude earthquake, I am extraordinarily proud of the great work my friends and climbing partners are doing to help the people of Nepal on their road to recovery.  Here is a terrific article written by my 17 year-old climbing partner, Matt Moniz, about his efforts in conjunction with super-twins, Willie & Damian Benegas, to help build a self-sustaining recovery in the hard-hit rural villages of the Manaslu region.

Additionally, please consider donating to any of the great relief organizations doing work to help Nepal’s recovery.  My deepest gratitude to all of you that have already done so or plan to do so.  To make things as easy as possible, I’ve provided a link below to my fundraising page which supports many of the incredible organizations making a difference every day in this time of great need.

Although Carla and I have been home nearly a week, and are extraordinarily grateful to be home safely among friends and loved ones, our heavy hearts remain with all of those who were so severely impacted by the tragic earthquake that struck Nepal on April 25th.  Witnessing the destruction and devastation firsthand, even on such a limited basis, has left an indelible mark on our souls.  We both awaken in the middle of the night after dreaming of the devastation and/or wondering through the blur of wakefulness if the ground beneath our bed is shaking.  So, we can only imagine how our friends in Nepal feel as they lie awake at night in open fields, with empty bellies, under tarps (for the lucky ones), next to their homes that were shaken to the ground.

Therefore, we have decided that in lieu of gifts for our upcoming wedding, we are asking our friends and family to donate to the relief and recovery efforts that will be ongoing in Nepal for weeks, months and years to come.  After much research, I have put together a fundraising page to support a few of the organizations that I am most familiar with and that are doing amazing work to help the people of Nepal get back on their feet and restore their country to the beautiful, vibrant place we know and love.

The GlobalGiving Earthquake Relief Fund, the default option on our fundraising page, is providing support (nearly $2.5MM thus far) to a broad range of NGOs active in Nepal focused on both immediate relief as well as long-term recovery.  Some of these organizations include:  International Medical Corps, Save The Children, International Disaster Volunteers, CARE Nepal, among many others.

Colorado-based dZi Foundation is focused on the hard-hit, remote villages where they work. In their words:  “all infrastructure has been damaged or destroyed. Aside from dZi, no other aid organizations work in these remote areas. We are focusing our funding on helping to rebuild these and the neighboring forgotten communities.”

Meanwhile, the American Himalayan Foundation is providing 100% of donations to its Earthquake Recovery Fund to those in need and “has been working in Nepal for 34 years, building deep relationships and responding to the priorities and concerns of the communities we work with. The strong partnerships we have developed over the years give us a foundation to build effective recovery projects upon, even in the most rural areas. And our long history and connection with the Himalaya further intensifies our commitment to helping the people of Nepal recover from this devastating tragedy.”

Please support our efforts and those of these great organizations to help the people in Nepal on their road to recovery.  And, thank you in advance for your gracious and generous donations.

Also, please note that currently an anonymous donor on GlobalGiving is matching monthly recurring gifts, which helps leverage your gifts further (while matching funds last and for recurring gifts that are 3-months or more in duration).

Carla and I made it home safely and just cleared customs after an uneventful trip that included the heli flight from base camp to Lukla, the crazy flight down from Lukla to Kathmandu, on to Bangkok and finally through Tokyo to Denver. It feels as though we’ve been traveling for days on end, which I suppose we have.

We’re extremely grateful to be home and for all of the love and support from friends, family, etc. It’s finally time to decompress a bit, let the events of the past few weeks sink-in, and begin again with fresh perspectives… but, first, it’s time to go pick-up our pup, Camden, for a proper welcome home!

This is a great article by acquaintance and long-time IMG guide, Mike Hamill. The video captured 3/4 the way down the article of the avalanche at base camp is indescribable if you haven’t seen it already.

So grateful even more weren’t injured or killed. Had the earthquake and subsequent avalanche happened even 24 hours previously, before many teams left for Camp I on an acclimatization rotation, and/or occurred at night when many more would have been in their tents, the casualties would have been exponentially higher.

Heli flight out of base camp

Carla and I made it to Kathmandu safely today after a late heli flight from base camp to Lukla last night.

We feel very fortunate and grateful to be here, although it’s surreal to be in the warm sunshine of Kathmandu and sitting in a nice, grassy garden writing this post. It’s quite the juxtaposition from the cold and devastation at base camp, let alone the destruction nearby in other parts of the city/country/region.

Big thank you to Willie for his leadership and tenacity in making it happen and Matt for his always upbeat demeanor. Hopefully, on to Bangkok tomorrow and home on May 3rd. More on ideas of how people can help those so devastated by these events in Nepal soon.

Minor slide off Lingtren this AM. We remain in base camp today assessing our options, but plan/hope to head down valley soon…

BIG avalanche off of Everest’s West Shoulder just now. Fortunately, it kept a somewhat respectable distance from base camp as we pack everything up, and serves as a prompt that it may be finally time to head out of here. Planning to start our way to Kathmandu tomorrow and head for home over the next several days… Stay tuned. 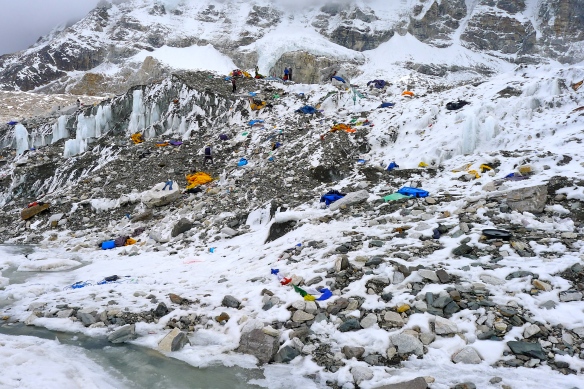 The devastation at Everest base camp

I was in Gorak Shep, the last village before Everest base camp at 17,000′ with my fiancee, Carla, when the earthquake and subsequent avalanches hit. Our teahouse shook violently and we were soon thereafter hit by a powerful powder blast from an avalanche (likely from the flanks of Nuptse).

The rest of my climbing team were ahead and arrived base camp as the earthquake and devastating avalanche struck. They were hit by the edge of the enormous powder blast (said to be moving at nearly 200mph) and survived its impact by ducking behind rocks and breathing through Buffs (a neck gaiter) to prevent the snow from entering their lungs. Our team leader, Willie Benegas, used his EMT training to help with triage at an improvised medical tent since the Himalayan Rescue Association’s ER tent was destroyed in the avalanche. My climbing partner, Matt Moniz, along with many others helped move the injured to the triage area throughout that afternoon and evening.

Amazingly, the medical team treated 85 people that afternoon and evening. Sadly, there are 15 confirmed fatalities, many due to severe head injuries, with the potential for that number to climb a bit still, but many more lives would have been lost without the extraordinary and collaborative efforts of many at base camp. It was truly a heroic effort. I am thankful to report that of the many people I know at Everest base camp this season none were among the casualties.

Feeling helpless in Gorak Shep, my fiancee and I finally heard from Willie and Matt at 5pm that they were alive and well and they told us of the devastation. We shepherded medical supplies there and departed at first light to bring additional supplies to base camp. That same morning all injured were evacuated via helicopter down valley for further treatment, starting with the most severely injured. All injured were evacuated by midday.

The following day, resources shifted to bring down the ~170 climbers stranded at Camps I and II, above the dangerous Khumbu Icefall, since the route through the icefall was badly damaged due to the earthquake. Efforts to repair the route ceased due to the aftershocks and 2nd earthquake that made repairing the route untenable. All climbers in Camps I and II have been evacuated via helicopter as of today.

Since the tragic events, many expedition teams have departed base camp to try to find their ways home. We have opted to remain here for the time being since we have lots of supplies and resources here. The tremendous and widespread destruction down valley and in Kathmandu lead us to believe that we are safer here for now. We hope to secure flights out of the country in the next 7-10 days and we will likely head down to Kathmandu to get to those flights only when necessary.

As for a potential return to Everest, all I can say is that I can’t imagine returning anytime soon… but never say never. This was to be my 3rd attempt in the past 4 years. In 2012, my tentmate came down with a bad GI infection on the summit push and, not surprisingly, I fell ill 24 hours later and my summit attempt ended. Last year, the tragic serac collapse off the West Shoulder of Everest into the Khumbu Icefall that killed 16, ended the season on April 18th. My team climbed Cho Oyu, the 6th highest peak at 26,906′, as this occurred but our plans to climb Everest afterwards were thwarted by those tragic events. And then we have this year… so, perhaps summiting Everest is not in the cards, although I take away lessons from each of these attempts and have no regrets… only feelings of loss and sadness for the fallen and my Sherpa friends who have been so adversely impacted by these tragedies as well as feeling blessed that I have survived these events and have the opportunity to return home safely to my friends and loved ones. To ask for anything more, after all of these tragedies, would feel ungrateful, ungracious and petty.

Our comms are pretty intermittent currently, so please know that “no news is good news” for now.

We’re hearing of lines of people at the Kathmandu airport of 2-3 kilometers long awaiting limited seats on limited flights out of the country as well as ~1,500 people awaiting flights to Kathmandu in the small village of Lukla. The villages below base camp are damaged to varying degrees as other expeditions head down valley, but supplies will be limited and could dwindle quickly, so we intend to stay put in base camp for now as it is our best option amongst a set of increasingly poor ones.

We are healthy and focused on helping/supporting one another as well as our Sherpa brothers, while also trying to find a safe way home to friends and loved ones. Hope to see you soon.