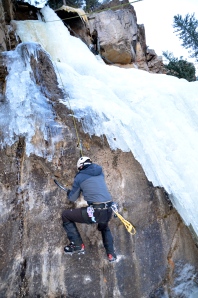 I went ice climbing with a group of people at Hidden Falls in southern-most Rocky Mountain National Park.  We had a group of seven that included good friends and regular climbing partners Bob and Laurie.  Laurie’s boyfriend, Steve, and his daughter, Hudson and Charles joined us as well.  We had several first or second time ice climbers in our group, so it was fun to get them some exposure and experience.

Hidden Falls was as crowded as I have ever seen it.  It must be due to the late forming La Niña and the poor snow/skiing conditions in the mountains, as there were several other parties there enjoying the ice.  So, we simply shared ropes and worked our way in where we could and got in a few good climbs each.  Above, and in the slideshow that the picture above links to, I’m having a little fun on a small mixed section of overhung rock below the primary ice flow.  It was a fun, relaxed day overall.  As we turn the page to 2012 though, the real training begins and you’ll see my adventures ramp up a bit as the departure to Nepal draws increasingly nearer.