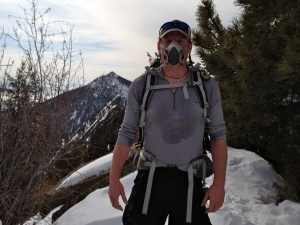 Due to continued extreme avalanche danger in CO these days, I stayed close to home and at lower, more stable elevations.  I did a quick training hike with great friend, Ben Focht, this past weekend.  Ben will join me for the trek into Everest base camp and will also climb the 20,161′ Lobuche Peak with me and the team, prior his returning home, as part of our acclimatization program in Nepal in preparation for the big hill.

It was a quick and easy hike to the summit of Green Mountain (8,144′) above Boulder, CO, requiring only 3 hours for the entire outing, which includes roughly 2,500′ of elevation gain and then descent over a total of six miles for the entire round trip.  Therefore, we made it more interesting by loading 40-50lbs in our packs to add to the challenge/work-out, and I climbed much of the way wearing the same model mask as the oxygen regulators we’ll use on the upper slopes of Everest (seen above).  It definitely made it more difficult to breathe.  It was a bit like running underwater or breathing with a plastic bag over your head.  Good practice though, as it’s a lot like breathing through a diving regulator, so it trains you to breath deeply, steadily and prepares your diaphragm to pull hard in anticipation of what’s to come a few months from now when the stakes will be a bit higher.

The best part of the outing was when Ben announced to a passing hiker that I was wearing the mask because I had SARS.  The poor guy nearly fell over trying to get away from me as quickly as possible and likely needed a fresh pair of underwear at the bottom of the hill.  His female companion seemed to enjoy the joke a bit more than he did… our apologies, sir.  A few more pictures of the outing available by clicking the picture above.