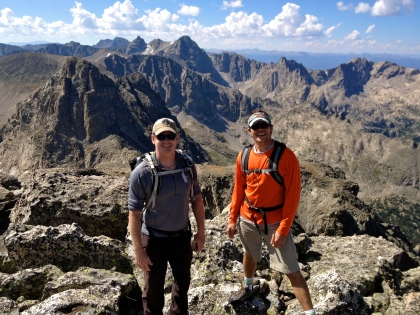 Atop the Indian Peaks – click picture for some more great photos

After spending a mostly relaxing Labor Day weekend in Traverse City, MI, boating, playing Can Jam (it’s an awesome game), and kayaking with lifelong buddies, Joey Suttle & the Kevins (Hammond & Kulp), it was time to return to the high-country to put in some work in the thin air.  Great friend, Ben, and I headed up to the Indian Peaks at an excruciatingly early 4am.  After a brief interlude with a cleverly hidden State Trooper (who knew radar worked that early in the AM) and a $165 fine, we were on our way.

We climbed the SE Ridge of Mt. Audubon (13,223′) that had a lot of fun terrain as well as a really interesting class III/class IV notch that had to be negotiated.  The climbing itself wasn’t terribly difficult, but the exposure was pretty significant, so let’s just say that this wasn’t a place where you would want to take a tumble.  After passing this section without incident, we scrambled the rest of the way to the summit and enjoyed the views of Rocky Mountain National Park, the surrounding Indian Peaks and the Continental Divide.

From there, we continued across Mt. Audubon’s class III West Ridge to the summit of Paiute Peak (13,088′).  It was a fun scramble down 600’+ and then back up to Paiute’s twin summits.  We touched both just to make sure and enjoyed a leisurely snack on top while soaking in the magnificent views.  It was a clear and beautiful morning, but the clouds started to form quickly and it was clear that it was time to head down before the afternoon thunderstorms moved in.

We made quick work of the chossy SE face of Paiute Peak down to Blue Lake and Lake Mitchell.  It was steep and loose, but we made it down safely just before the rain and thunder started.  Once we were back on the trail, it was a quick hike back to the truck.  On the way home, we enjoyed some of Nederland’s finest BBQ while rehydrating (where we also ran into buddy Bob and some other climbing partners), making it a just-about-perfect Colorado day.